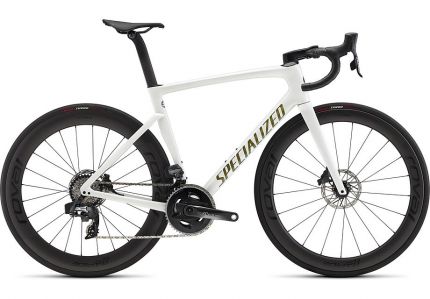 • "Aero is everything”—we’ve been preaching it for years and it’s still the driving force for the new Tarmac. In our quest for tube shapes that deliver the fastest frame that the UCI rules allow, we took a page out of the Venge development book and utilized our FreeFoil Shape Library. Armed with a library of optimized shapes, we turned to the Win Tunnel to plug these shapes into a modular test bike, for more testing and validation. The result? A new Tarmac that’s the fastest we’ve tested—45 seconds faster over 40km than the Tarmac SL6. No compromises, just pure speed. • While aerodynamics were paramount to the Tarmac’s development, and to the development of all of our race bikes, weight was the co-pilot on this optimal race bike journey. Previously “aero bikes” always compromised in the weight department—the more drag you reduced, the more weight you gained. With the new Tarmac, our design philosophy was to keep it at, or below, the UCI weight limit out of the box, with no sacrifices to aerodynamics. And with the help of the FreeFoil Shape Library, tools like isotopic FEA analysis, and some engineering wizardry by the best engineers in the industry, we delivered a frame that weighs a mere 920 grams, without giving up a gram of aero, stiffness or ride quality. • Continuing our quest to develop the perfect race bike, we used our Rider-First Engineered™ philosophy to ensure that the new Tarmac is the most balanced, best handling Tarmac yet—no matter the size. With an army of the world’s best test riders from our three World Tour Teams — Boels-Dolmans, Deceuninck-Quick-Step, and Bora-hansgrohe — we made changes to the Tarmac based on their thousands of kilometers on the road. We balanced the ride quality between the front and rear end, so even the longest days in the saddle continue to be comfortable—all without giving up anything to the Tarmac’s legendary handling and race-winning snappiness. • Building on the learnings from the Venge, the new Tarmac utilizes simple integration to create a clean, fast cockpit that’s easy to live with. We’ve improved the routing for any configuration — mechanical shifting, traditional stems, round bars, etc. — all while keeping its aerodynamic attributes. These same traits also make the new Tarmac easy to work on and easy to travel with. It’s a win-win.